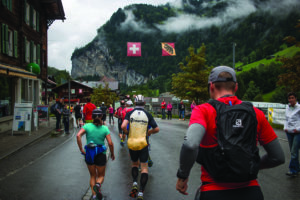 Arko Højholt reports from the Inferno Half Marathon

There’s a certain smell in the air. Part mountain scent, part minty massage gel, and part well-worn running shoes. Perhaps a hint of natural nervousness as well. It’s an hour before race start and the runners are mingling in the registration area at the Jungfrau campsite in Lauterbrunnen, Switzerland. Four-hundred and twenty people are signed up for what is considered to one of the toughest running events in Europe, the Inferno Half Marathon. The distance is what it is, the handful of runners I chat with this morning aren’t worried about that. No, the intimidating part is the 2,175 metres of grueling climb to the finish on top of Schilthorn in the western Alps. At 10.15 the starting pistol echoes in the valley and the runners are off. They quickly pass through the small and quaint village of Lauterbrunnen, where the locals are cheering them on with “Hop! Hop! Hop!” and “Schnell, schnell,” and then the runners suddenly find themselves in the hairpin turns leading the 11 kilometres and approximately 800 vertical metres up to the village of Mürren. This is considered the easy part, “merely a warm-up” as the organisers put it, and I suppose that wouldn’t offend any one the participants, even though a few show vague signs of regret when reaching Mürren. After all, the climb isn’t too drastic and they have smooth tarmac under their feet. For now.

Mürren is the halfway point, both physically and mentally. Mürren is the end of sweet and cool tarmac and the beginning of the steeper section of rough trails. It is in this little village balancing on the edge of a relatively narrow plateaux that many are wiping off their smiles and putting on their most serious stone faces.

Still, it’s hard not to smile while passing through the village. The locals here are cheering even harder than the folks down in the valley — and the view is simply fantastic. Across the valley mountains like Gletscherhorn, Nesthorn, and not least the monumental Jungfrau paints a beautiful picture that, I assume, never will be taken down from the runner’s memories. It’s quite the paradox that something called Inferno takes place in what most people would describe as a true paradise. These people are crazy

“You’re looking strong! Just up the hill from here! It’s easy!” a young man is shouting in German. He’s leaning against a souvenir shop, sipping from a can of beer.

He holds up his beer can with a telling smile.

“I actually ran it a few years ago. It’s not easy at all. In fact, I thought I was going to die,” he admits before he nods in the direction of the runners and concludes: “These people are crazy, trust me”.

I don’t know about that. Perhaps a little bit. I guess you’d have to be to put on your shoes and run up a mountain. Sure, there are people like Kilian Jornet who run much further in their respective mountains. But all is relative; my kilometres doesn’t necessarily feel like your kilometres. And the neat thing about a half marathon distance is that it caters to a lot more people — in this case to both big boys and girls and people who could easily be their grandparents. Or the four soldiers who’re doing this years run in uniform, solid boots, and with a heavy bag pack.

“How are you doing?” I ask a guy shuffling up the steep path behind Mürren. His calves quivers noticeably and his face looks like it’s about to slide off his skull.

“Hng,” is all he mutters while staring at me like I’m an unknown creature from an uncharted region of the universe.

A few minutes later another fella comes around the corner. He must be at least a decade or two older than the other guy, but his pace looks like it hasn’t slowed since the bottom of the valley. I’m about to ask how he is doing but instead he asks me with a grin. I nod and smile and tell him to keep it up — and that there are less than seven kilometres to go.

“Ja, fast da,” he laughs. Almost there. And then, with his eyes fixed on Schilthorn, he overtakes the first, soon-to-be faceless guy.

Soon after we’re above the treeline. Grass and bushes are replaced by porous brownish grey rock. Naked mountain. On top of Schilthorn balances Piz Gloria, the panoramic revolving restaurant where James Bond fought Ernst Stavro Blofeld in On Her Majesty’s Secret Service. It still looks a bit like an evil lair, not least because of the heavy enveloping clouds, but there doesn’t appear to be any bad guys around anymore.

I place myself on the narrow ridge leading up to the finish line. It’s eerily quiet and I can’t see more than 20 meters or so ahead. I feel utterly alone up here. But suddenly something emerges in all the white. A guy wearing a red t-shirt and bright green shoes. Number 1204, Jonas Lehmann from Germany. He’s the first and unless someone uses a Bond-gadget, will win it. The final 500 meters are pure evil, even for someone who hasn’t run 20 something kilometres to get here, and obviously Jonas feels the same way. He slows down, bends over, uses his arms to climb in the worst places and eventually crosses the line in 2:04:47.

Stay in car-free Mürren, the highest resort and village in Switzerland’s Bernese Oberland.  Accommodation to suit all budgets (self-catering chalets to 4 star hotels) available at www.muerren.swiss